I have lived in Albuquerque for 24 years now and I have probably eaten more food from Golden Pride than any other restaurant, fast food or otherwise, in town. There is a very good reason for that; their food is not only fast and inexpensive, it is delicious!

When I was still working there was hardly a week that went by in which I didn't stop for a breakfast burrito (the #1 is still my favorite burrito in town today) and often added a green chili stew or posole for my lunch. I could depend on getting through the drive-through in record time, no matter how long the line, and on having a great breakfast and/or lunch ready made for me when I arrived at my office.
However, that was not the only time I stopped at Golden Pride. I love getting their barbecued chicken or ribs to take home for a quick and easy dinner with virtually no cleanup required! All in all, I've probably tried more than half their menu items over the years. One thing I had never tried, however, was their fried chicken and come to find out when Golden Pride first began their menu consisted only of fried chicken, fries and sodas! I tried their fried chicken just the other day and I have to say that it was great. I had a drumstick (I definitely like the dark meat best) and it was not only wonderfully crispy on the outside but juicy as opposed to greasy on the inside!
Golden Pride is an offshoot of the Frontier, an Albuquerque and University of New Mexico legend, opened in 1971 across from the University Library. Golden Pride, owned by the same family, came into being about two years later and the rest, as they say, is history – good, inexpensive and fast food history! 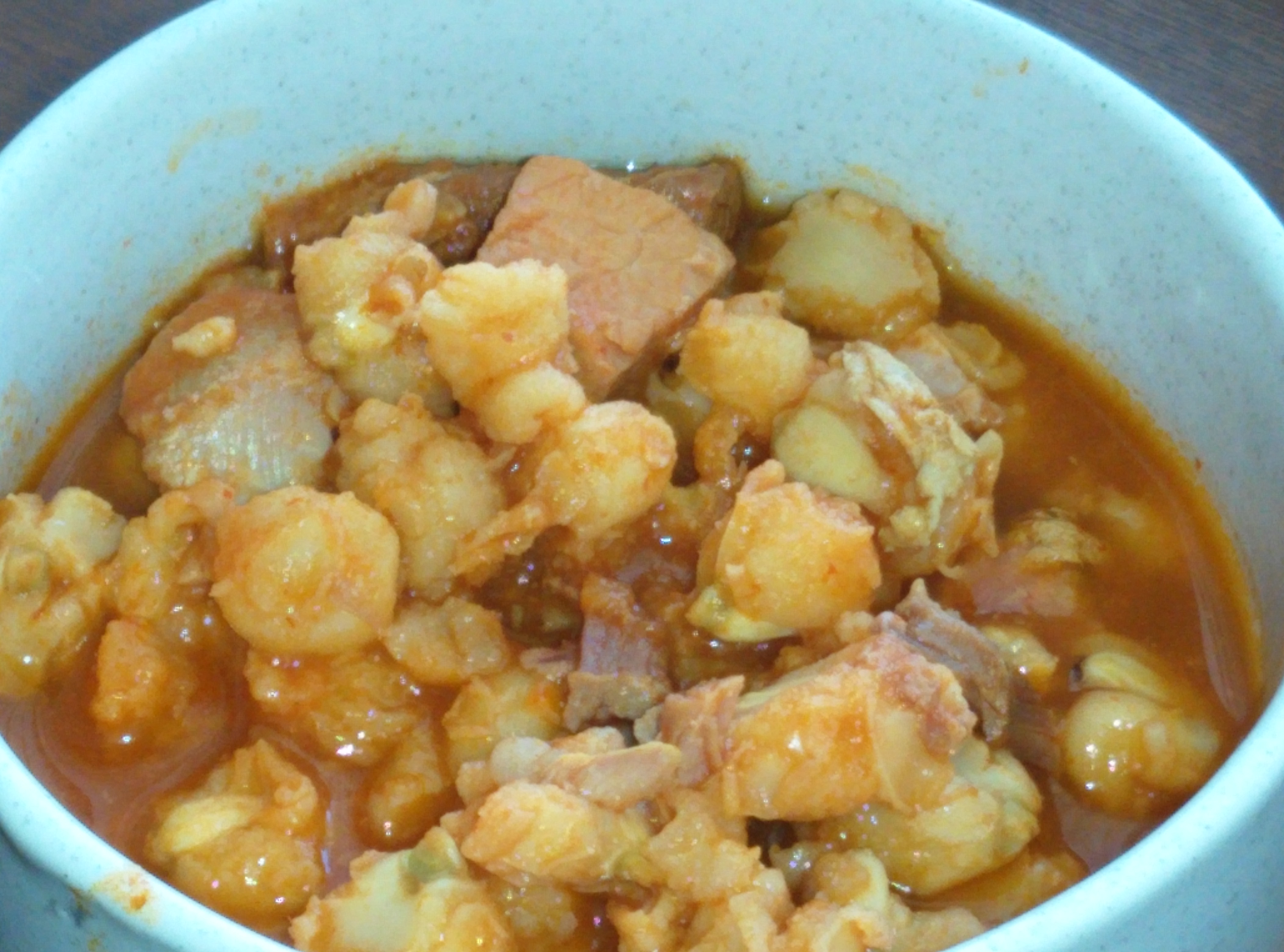 To go with your breakfast burrito you can always order their hash browns, in three varieties – plain, with cheese and green chile, or with carne adovada and cheese. Bacon is also available, by the slice, for those who don't want it included in their burrito. I'm a savory food person but if you are a 'sweets for breakfast' type, you can get a famous Frontier Sweet Roll (or half a dozen frozen sweet rolls) at Golden Pride as well. And if all of this isn't tempting enough, they serve breakfast all day!
Just recently I went out to lunch with a friend and the restaurant we dined at didn't have posole even though it was listed as available on their website. She was sorely disappointed. I mentioned that if she like posole, Golden Pride had a wonderful posole and she could get it to go. Needless to say, on our way home from lunch we stopped at Golden Pride and she got a medium sized container to go. I saw her just a few days later and asked how she liked the posole. She lit up like a lamp – “I loved it,” she said. She had been going to Golden Pride off and on for burritos (usually for breakfast on the way to work) and said she either didn't realize they sold posole or had forgotten over time. In any event, she assured me that she would be going back really soon for another helping. I have a feeling it is going to become a staple for her! I, too, really like their posole but have to admit that their green chili stew is my favorite. You can order both in different sizes, with or without their house made tortillas. You can also get their tortillas individually or in multiples. For that matter, you can get a lot of their offerings in bulk.
Their chicken (fried, barbecued, white meat only) is available in various choices ranging from two piece plates to 20 piece bulk orders, nuggets and sandwiches. Plates include two of their tempting sides and they have many choices available. Their barbecued ribs are available by the pound, plate, platter or combos with the same choice of sides. Packages of the chicken or ribs, frozen, are also available to take home and savor at another time. They are really handy to have in the freezer for a quick and delicious meal when you're not up to going out, even for takeout!
Of course, no restaurant in Albuquerque would be complete without New Mexican specialties and Golden Pride does this category justice. As I've already stated, I love their posole and green chili stew; both are always fresh and tasty – mild to medium in heat levels and offered in different sizes, with our without their house made tortillas. Other New Mexican specials on their menu include the carne adovada burrito, tacos (both hard and soft), and enchiladas. Vegetarians can get a burrito as well – beans, green chili and cheese.
Golden Pride does offer other smaller selections along with their soups – salads and kid's meals – so there is always something for everyone in the family regardless of their eating preferences.
To complete your meal you can mix your own soft drinks in 100 plus different combinations. Ice tea, coffee, milk and orange juice are also on the menu.
Golden Pride is a no-nonsense take out or eat in restaurant with four convenient locations throughout the city. My favorite has always been the one on Central west of Eubank – it's the one that was on my way to work! But go by any of the locations, especially first thing in the morning or at lunch time, and you are likely to see long lines at the drive-throughs. Fear not, however; traffic moves quickly through their take out lanes. The more than 150 full- and part-time employees at the four locations know their business and keep the food coming, hot and tasty!